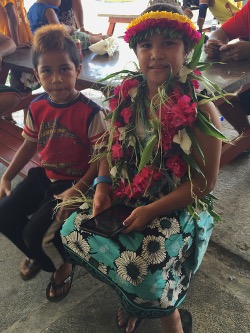 All around the globe, people need connection to nature and to each other –
even in some of the most nature-rich places on the planet.

When I think of the remote island nations of Micronesia and Melanesia, it is easy to imagine lush jungles and beautiful turquoise water full of wildlife.  I think of people whose children climb trees, paddle canoes, and catch fish for their dinners.  People who are not separated from nature by concrete and noise, but who live immersed in nature every day.  I realize that a lot of growth and change has occurred in the world over the last decade or two.  But in my mind, compared to Western countries, Micronesia seems like a place whose people are very connected to the natural world.  During my recent visit, I saw deep connection to nature, but I also saw the challenges that people face.  The trend towards a global culture means that even people living in wild, nature-rich places need thoughtful connection to nature and to each other as they face social pressure to acquire more material goods in the pursuit of a popularized western lifestyle.

One of the most moving experiences I had while in Micronesia was during the return trip home when we had an unexpected layover on the island of Chuuk.  As the sun was setting, I walked out to the fishing pier to enjoy one last look at the ocean before heading home.  A new friend, Dr. Gabriel

Kulwuam, joined me on the pier, and we spent the next hour talking and trading stories.  Gabriel lives on Manus Island in Papua New Guinea.  He has a PhD from Queensland, Australia and works for The Nature Conservancy.  We spoke about his island home and how it has changed over the last few decades.  He described his home in an email to me, and it matched closely with my vision of island life in his part of the world: “I am now in the village among Mother Nature. I live [in] a coastal village about 15 metres from the beach and breaking waves. My village is within big lagoon where I watch seagulls flying, fish jumping, hear the birds singing. Around my house we [grow] bananas and root crops. As compared to the city and people you are with, the focus here is on community and family values and doings.”  We both find it amazing that he can now travel to the other side of the world and call his wife at home on a small Pacific Island in a hut made of natural materials where she is cooking dinner over a wood fire, and they can talk to each other by cell phone.  Not all changes are bad.

Then Gabriel asked me about the work that I do.  I told him about the need I saw for families to have time all together.  Families in the US seem to be less and less connected to each other, as kids and parents are both over-scheduled and busy all the time.  Families have very little time to be together, simply talking, listening and connecting. In addition to feeling less connected to each other, people are also less connected to nature.  Children spend very little time outdoors, spending it instead in front of screens at home and at school.  Richard Louv describes this phenomenon as “Nature Deficit Disorder” in his book “Last Child in the Woods.”  With three children of my own, I saw the families around us (ours included) struggling to spend time together, and rarely, if ever, spending that time outdoors in nature.  This inspired me to create Families in Nature, a non-profit program whose mission is to connect families to nature and to each other through time spent learning, playing and volunteering outdoors. In addition to time together with family, children need stories of positive change in the world and the opportunity to fall in love with nature and become fascinated by it.  That love and fascination can only develop if children experience the natural world.  Connection to nature and time spent immersed in nature benefit children (and adults) in many physical and emotional ways, as well as helping create the next generation of conservationists.  The need for connection to nature can be felt all over the world, from busy cities to nature-rich Pacific islands. 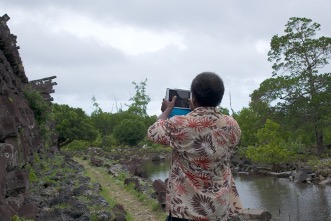 Gabriel was very interested my program, which surprised me a little.  I could not imagine that people in Papua New Guinea would need help being immersed in and connected to nature. Gabriel explained that it is becoming more and more difficult to remain close to nature as “we are now faced with pressure from the western world to have more material goods.”  He told me of his grandchildren. Three of them live in a large city in PNG.  These grandchildren seem very similar to Western children – spending much of their time indoors and online, well-educated, but less connected to nature.  His other three grandchildren live on Manus Island, in a village rather than in a large city.  These grandchildren know how to paddle a canoe, catch fish, and find their way in the forest.  They have survival skills and spend much of their time surrounded by nature exploring and playing.  Gabriel believes that it is important for children to have these skills and spend time in the forest and in the ocean.   He would like all of his grandchildren to have this connection to nature, not just those who live outside the city.  He then surprised me by asking if it was possible to start a program like mine in Papua New Guinea.  I explained to him what I have told many parents and grandparents here in the US, who have the very same wishes for their children to feel connected to nature.  Sometimes, all you need to do is invite your children or grandchildren and their friends to go canoeing.  I believe that humans are innately programmed to connect to the natural world if they are simply given the chance to experience it.  If you take families outside to a nature-rich place, you help them feel safe and comfortable, and you make them turn off their screens and cell phones for the afternoon, they will naturally start to form a connection to the nature that surrounds them.  They will talk to each other and form deeper personal connections based on uninterrupted interactions of genuine attention.  They will leave feeling more connected to each other and to the natural world.  They may go back to their busy lives and nearly-constant screens, but they will have a shared memory of their time together on the small adventure you planned.  String a few small adventures together, and soon families will know how to fish, how to paddle a canoe, and how to find their way in the forest.  They will have shared memories that don’t involve the internet or traffic or rushing around.  And sometimes all you need to create a strong family relationship is uninterrupted, genuine communication and shared memories of time spent together outside.

Children who grow up in the modern world – whether in a large American city, or on a small island in Papua New Guinea – can become what Rich Louv and Gabriel Kalwuam both independently called a “hybrid” child.  A “hybrid” child can navigate the world of the internet, cell phones, computers, and a global economy, as well as the forest or the ocean.  As parents on opposite sides of the planet, Gabriel and I share the common goal of raising “hybrid” children/grandchildren within a strong, connected family.  While in Pohnpei, I had the opportunity to see how people live.  I saw children playing tag and relaxing in the shade around the large roots of trees.  I saw them swinging on homemade swings made of strips of fabric hung in trees.  At the same time, many people had cell phones or tablets.  I saw one lovely little girl, covered head to toe in flowers to celebrate her 10th birthday.  She was happily playing with her siblings and parents, outdoors, and she was playing on her tablet.  At first, I thought “how sad that she is playing on a screen in this beautiful place.” But perhaps it wasn’t sad at all. Perhaps she is a perfect example of a “hybrid” child.  I truly hope that the communities on these small Pacific Islands can continue to spend time relaxing together in the shade of a tree while also understanding the world of cell phones and internet, rather than moving towards the Western model of nearly constant screen time and a fast-paced life.  If these communities can strike that balance, they will have achieved the hybrid model and have the best of both worlds.  They will have ability to call someone on the other side of the planet and stay connected despite distance, the ability to collaborate with multi-national NGOs to affect change in their community and the world, and the ability to catch fish, paddle a canoe and feel connected to the natural world.  In an email to me after the workshop, Gabriel wrote, “You are not alone in this world; we are together in spirit and in thoughts connecting and sharing because we live in a changing global village. We are all fighting in the same battle field against the common enemy for cause of better world and better life.”

As our economy and our culture become more and more global, so does our need for connection to nature and to each other. So no matter what part of the planet you live on, grab your children, grandchildren, friends and neighbors and go outside on an adventure together.  Tell positive stories of change and inspire your adventurers to fall in love with the natural world around them.

This article was originally published by The Children & Nature Network in December 2015: “People Need Connection to Nature & Each Other: Nature-Deficit Disorder Exists Even in Some of the Most Nature-Rich Places on the Planet.”

Previous reading
What are we going to do for Spring Break this year?
Next reading
Everyone Needs Nature and Nature Needs Everyone